Navigate back to the homepage

“Many statements which are accepted as truth because they have been passed down by tradition look like truth only because we have never tested them, never thought about them in a more precise way.” - Leo Tolstoy

In general, the term energy refers to a concept that can be defined as “the potential for causing change”, and therefore, one can say that energy is the cause of any change.

An object must be moved or change must take place for work to be done.

What’s important is the difference in energy between two events over a period. That’s the work done. That’s what actually changed.

Energy is neither created nor destroyed, it is only changing form, or transforming.

Everything is in a constant state of flux.

This gives us a better understanding of how to play the game of energy, and retain a more conscious ability to work with it.

Energy is everything when you get down to it.

Vibration is the basis of the universe.

Alchemy is working with forms changing from one vibration to the next.

For more on vibratory effects on matter, see Cymatics

To most, perception is reality.

Most of what we perceive is a combination of data and information.

It takes a fair amount of critical thinking to be able to shift one’s scope to begin to comprehend objective reality with a contextual understanding of knowledge and wisdom.

To truly perceive objective reality, one must make an effort to become aware of it. 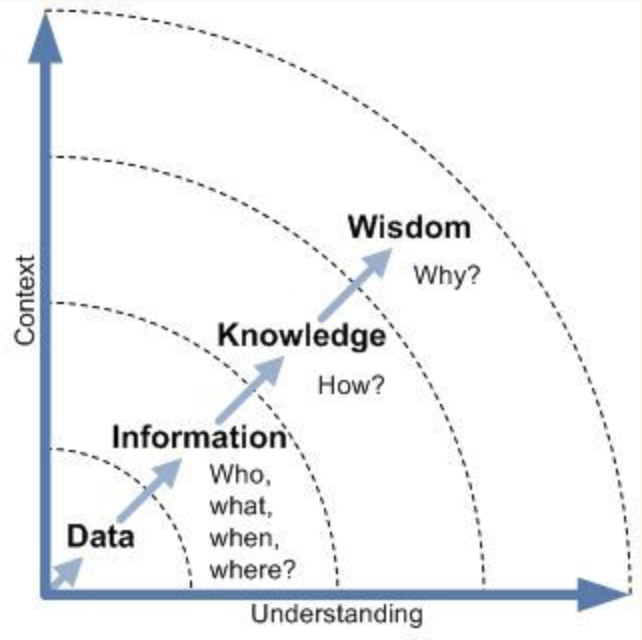 If you wish to take proper action against a problem, it must begin with the proper perception.

What informs your perception?

Your emotion, senses, and thought. Your Knowledge.

In other words, you inform your perception.

Knowing this, can we gain function on that in which we perceive?

“How we interpret the events in our lives, our perspective, is the framework for our forthcoming response… Where the head goes, the body follows. Perception precedes action. Right action follows the right perspective.” - Ryan Holiday, The Obstacle is the Way

Take a Step Back

A proper perception is generally garnered by a widening of scope.

Data points are colored with information.

Lines are drawn between information points to gain knowledge.

Seemingly unrelated points of knowledge are connected through analogous thought to gain insight.

Points of insight are then followed, carving the path of wisdom.

A birds-eye view informs everything.

“I want to stand as close to the edge as I can without going over. Out on the edge, you see all kinds of things you can’t see from the center.” ― Kurt Vonnegut, Player Piano

As with most emotions, a fine line will generally exist between two extremities.

Energy exists as a monetary unit of creation. Any man-made thing simply began as energy and thought.

To solve a problem, energy (attention) must be expensed on time (through taking action), over emotion.

Engaging in emotion while solving a problem is the antithesis of what you’re trying to accomplish.

That’s a negative feedback loop, and a waste.

Therefore, one could surmise, time is not necessarily money. It seems apparent that energy is money.

It costs more energy to hate than to love.

As it physically costs more energy to hate than it does to love, it is, in fact, more efficacious to approach problems through a scope of love over hate; to garner the best long term solution.

What if we stopped paying attention and decided to become aware?

Engaging in awareness does not.

Doing so expenses the least amount of energy for all while altering scope on time itself.

If the goal is to gain efficiency through awareness, we must focus on how our energy is spent digesting information presented.

Taking the time to pause and reorganize our gathered information is most efficacious.

Then we can take a step back, broaden our scope, and review our found knowledge with a birds-eye to gain insight.

This insight will inform our action, or solution.

Shakespearian scholars toy with the concept of the fool, the jester, or the comedian.

The Shakespearean archetype of the fool exists for the audience.

The fool exists as a conduit of communication.

They communicate openly with the audience to provide background or a wider scoped perception of other characters.

The archetype of the fool generally retains the widest scope relating to the story unfolding.

The fool is omnipotent in terms of the affairs of other characters.

Therefore, the fool is always primed to make the least amount of decisions with the most impact to the overall scene.

A flick of the wrist can produce tremendous results.

The fool may allow himself to be perceived as a fool, but this allows him maximum efficiency.

To the untrained eye, the fool presents as a trickster, an individual with one leg in and one leg out, in terms of emotional investment.

They appear foolish, as they speak in riddles to conceal their true, objective nature.

From Attention to Awareness

To the aware, the fool’s dunce cap fades away and is replaced with a magician’s wand.

There’s a fine line between fool and magician. Just as there is between love and hate.

The trained eye then becomes aware of the fool’s true nature, as the magician.

Through a shift in scope, the fool is transformed into the puller of the strings, the one character who retains an objective perception regarding the play unfolding before the audience.

“An expert is a person who has made all the mistakes that can be made in a very narrow field.” ― Niels Bohr

The magician plants seeds in the minds of other characters, and the audience.

The magician controls both their perceptions; affecting the outcome of the play and how the audience is informed by it.

You see, the way the characters interact with and perceive the fool/magician say much more about them than it does him.

Almost as if the observer is informing the shape of their reality.

The archetype of the fool is hyper representative of quantum mechanics.

The perception of the fool or magician is dependant on the observer.

When solving a problem, it’s best to respond as the magician (guided by objective reality), over reacting as the fool (guided only by perception).

How do we take this dichotomous concept and apply it to our day to day lives? We must become more than just individuals reliant on perception.

Rather, we must become proponents of objectivity.

In doing so, we’re able to take control of how the universe observes us.

Anyone familiar with the double-slit experiment?

The Eye of the Beholder

What does the double-slit experiment teach us?

One wave can affect another wave, causing change.

The simple act of observing a wave introduces another wave, changing the initial wave’s makeup.

Following this logic, the wave of reality can be altered simply by observation. Awareness

Perhaps, One’s reality is derived of the individual perceiving it.

“When you are not observing something, it exists as a multitude of potential probabilities. But when you observe something, your observation dramatically affects how that thing snaps into a particular position of reality.” - Josh P. Warren Use The Force

What’s in the box?

You have a cat in a box. That cat is both alive and dead until you open the box and view what is inside.

"The scenario presents a hypothetical cat that may be simultaneously both alive and dead, a state known as a quantum superposition, as a result of being linked to a random subatomic event that may or may not occur."

Quantum physics shows us that reality is dependent on the observer.

If you wish to shift reality, turn a problem (negative), into a solution (positive), you must command your perception of it.

Be at the cause over the effect.

For more on this, I highly recommend looking into Quantum Atomic Theory, which states:

“Time and space is relative or personal to each one of us as a process of symmetry forming and breaking.”

Just as two waves interact with and inform the makeup of one another.

The Choice is Yours

React as the fool, guided by perception:

Respond as the magician, guided by awareness:

Your Choice Informs Your Time Spent

Integrity is just energy. Are you energetically whole and alive?

Practice the Four Pillars of Integrity

Do you have anything unsaid? Practice candor.

Do you have anything unkept? Any agreements you have not kept? If so, this is an integrity breach. Losing energy.

Do you have anything unowned? Are you blaming others rather than owning your life?

Do you have anything unfelt? Any feelings you have not felt or are avoiding

Once you are willing to do this, your integrity returns.

A life full of aliveness is rooted in integrity.

The 4 Noble Truths and Eightfold Path

This can be applied to anything in your life that keeps coming up over and over to resolve.

These are the basics of Buddhism.

It is not necessarily a religion.

It’s a philosophy to be applied to life; to address the things you may be struggling with.

To raise your energetic frequency to better exist or become more conscious in the holographic reality you exist in.

Avoid causing negative karma in your soul so that you will not have to make that wrong, right.

The goal is to live the most peaceful life without creating more suffering and chaos for the next lifetime.

It is best to do so as the magician, energy-efficient, and objectively aware of reality.

This post was inspired by Von Galt’s appearance on Lighting the Void.

Be the first to receive our latest content with the ability to opt-out at anytime. We promise to not spam your inbox or share your email with any third parties.

Will as You May